Breaker Technology Inc. (BTI) received the second-class prize in China Gold Association's 2017 Science and Technology award for its contribution to improving underground productivity and safety, through its latest version of the Breaker Intel System at Shandong Gold's Xincheng Gold Mine.

"We appreciate being recognized for our contribution toward improving the safety and productivity at our customer's operation," says BTI President Don Sissons.

BTI's Breaker Intel System is a multi-faceted control system that maximizes rockbreaking operations and creates a safer, more secure working environment while easily connecting to the mine's existing process control system. The system not only includes long distance controls but also offers an abundance of other features such as force and speed control, automated movements, collision avoidance, monitoring and diagnostics and the ability to operate multiple rockbreaker stations with a single remote.

"All over the world, we are seeing a growing desire to remove operators from hazardous work locations and furnish employees with the tools they need to be safe and productive," says Sissons. "This trend certainly aligns well with BTI's top priorities: safety, quality, and productivity."

At the Xincheng Gold Mine, BTI commissioned its multi-boom remote control station in an above-ground office to operate eight different rockbreaker systems underground. The operating station provides employees with a comfortable, clean and air-conditioned office environment with immediate access to all rockbreaker operations. The new system also reduces the number of operators needed while adding improved efficiencies. 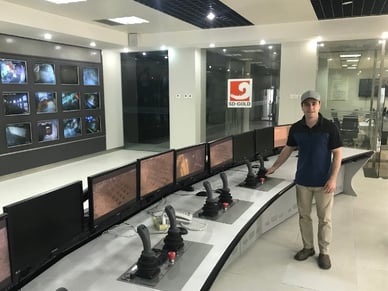 Before installing BTI's Breaker Intel System, Xincheng Gold Mine's encountered several issues in its production rate and safety. The mine employed 32 operators to work three shifts at eight underground rockbreaker stations in conditions that exposed operators to dust and flyrock in ambient temperatures above 40 degrees Celcius. With BTI's Breaker Intel System, the mine reduced the number of operators to eight, while also improving productivity by providing them with immediate access to all rockbreaker systems, rather than having to travel to each station, which took up to an hour for each operator, which creates a more efficient workflow.
"BTI's vision is to develop autonomous rockbreaking equipment, and we are pleased with our progress in that direction," says Sissons. "We have several successful installations with remote operation, similar to Xincheng Gold Mine, operating around the world."

For BTI, the project at Xincheng Gold Mine was an ideal opportunity to develop its Breaker Intel System further to include multi-boom operation, another stepping stone in BTI's development towards full automation of rockbreaker systems. According to Sissons, its next steps are now to add automated movements, allowing the operator to perform a few simple, routine sequences such as "park" or "deploy" with the touch of a button.

"We look forward to continuing to develop this technology toward complete autonomous operation that will provide the safest and most productive rockbreaking solutions in the world," says Sissons.

Fresh from our blog